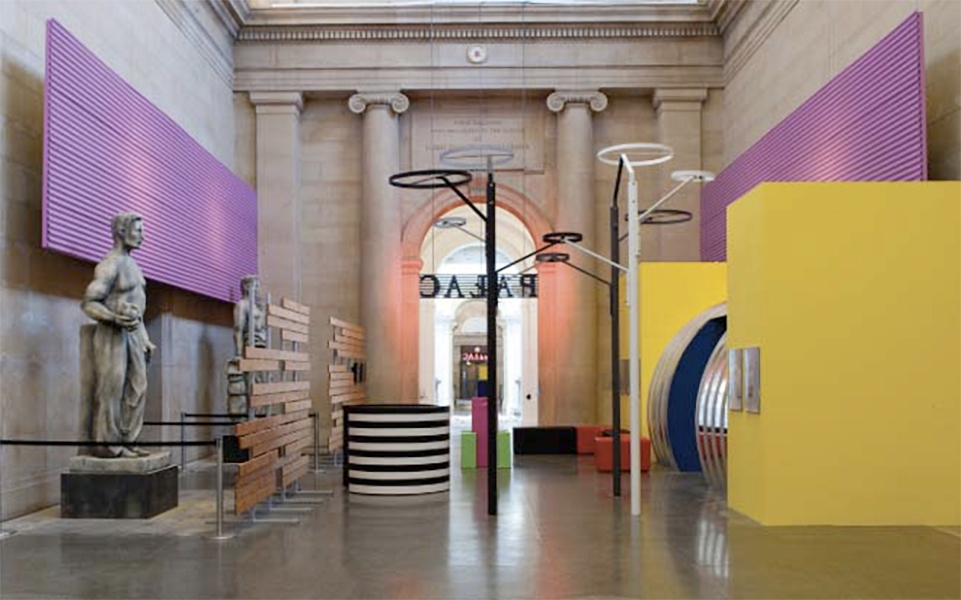 Matthew Darbyshire’s interests lies in the study and re-presentation of contemporary design that everywhere dominates both public and private spaces.

His assembled objects, gathered from affordable brand-name goods, try to explain why we find these intensely coloured things so appealing and contemporary, and why we use them to project an image of ourselves. His installations are a palette of glowing colours that are familiar to anyone who has visited an arts centre, a retail outlet, or almost any commercial space, reminding us constantly of how our experience of space is subtly manipulated.

Darbyshire’s project as part of Everything Everywhere at Frieze Art Fair 2010, was a re-design of the ticket tent to simulate the feel and design of a popular mobile phone concept store, drawing attention to the general threat such sterile, corporately colonized and non-specific design solutions pose to our culture at large. It was a project intended to question our willingness to surrender our autonomy, within the arts and elsewhere, and for whose benefit are these one-size-fits-all, blandly consensual measures? Darbyshire’s ticketing experience, a flexible design “kit-of-parts”, examined how an audience with varying levels of familiarity with public, domestic and commercial design would react to the displaced yet generic design conventions employed within the structure.

For his Stanley Picker Fellowship, in place of a conventional exhibition, Darbyshire  will be creating a new work for the Gallery that will critically intervene in the design and delivery of the venue’s upcoming capital development programme in 2012.