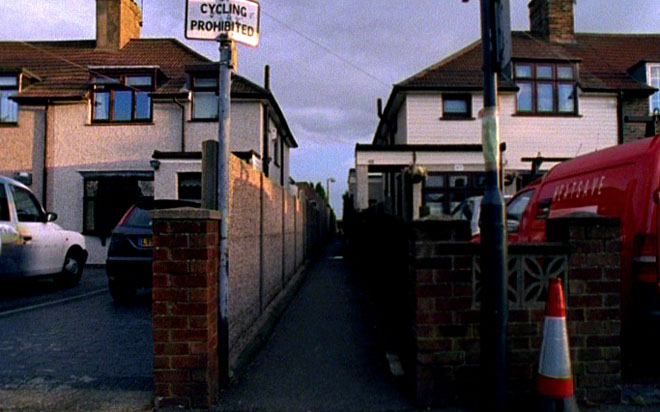 Rachel Davis A Time and a Place (2004) digital video still

A Time & A Place was Davies’ first gallery exhibition of works comprising films from the previous ten years, together with a new site-specific piece and a book edition. Presenting the films together within one space focused her personal themes of navigation, narrative and retrospect, the relationship between the individual and the sub/urban landscape, the real and the performed, and her growing interest in how the spectator may come to inhabit the space of representation. Marking moments in time, there were echoes and threads between films; some visible, some lost. The whole 50-minute sequence mapped the development of Davies’s ten-year relationship with the art form.

HONG KONG TO HULL (16min 1992-1999) reworks documentary footage from the artist’s overland journey in 1991. Fleeting connections with strangers, immersion in the moment, episodes of solitary reflection; the camera is witness and marker of passing time. Seven years later the random footage is reprocessed into an ordered split-screen pattern that takes us on a circular journey. Edited by Nick Fenton.

SO WE WENT DANCING. (3min 1995-2000) reworks holiday footage combining it with the voice of a 92-year old woman looking back at an unexpectedly romantic time in her life.

GOLD (10min 2004) interprets the adrenaline-fuelled world of the teenage girl, full of promise, magic and attitude, through the skills and competition of two young girls in their local gym. Produced by Polly Nash / Featuring Amy Tarrant and Jessica Brough / Choreographed by H2Dance / Shot by Natasha Braier / Music by Tom Gilleron / Edited by Nick Fenton / Produced by Polly Nash / Funded by Arts Council England.

WE GOT OLD (10min 2002), a collaboration with choreographer Annie Lok, imagines a series of tableau that revisit a place from past memory. Shot in London and Hong Kong, the film alludes to senses of nostalgia and an acceptance of the passing of time. Shot by Natasha Braier / Music by Matt Davidson / Edited by Daniel Saul / Funded by The Place & Kingston University / Distributed by Lux Artist Film and Video.

A TIME AND A PLACE (9min 2004) charts the artist’s impressions of the walked journey from Kingston Station to Knights Park that she has taken regularly over the past nine years, and considers how performance features in the everyday and how people become part of a remembered landscape. Featuring performers from BA Live Arts and BA Fine Art, Faculty of Art, Design & Music.

Rachel Davies has been making film, video and animation for the last 14 years, using personal experience and travel as a starting point for her work. Often collaborating with other artists, her works are emotional, passionate and melancholic human studies that aim to challenge expectations of genre and touch new audiences.

Davies’ first film, made whilst at Nottingham Trent University, reached the London Film Festival in 1991. She then travelled to Hong Kong where she worked on commercials and directed award-winning animated promos for MTV Asia. Returning to Britain she studied at the Royal College of Art and began mixing drama with animation to make personal short experimental films that have subsequently been screened at film festivals worldwide. She has directed numerous short films for Channel 4 collaborating with poets, dancers, musicians and performance artists; an education series for BBC 2 and various projection pieces for dance and theatre collaborations.

In 2001 she was Associate Artist at The Place, London. She is a part-time Research Fellow within the Faculty of Art, Design & Music at Kingston University. Recent screenings include Chicago International Film Festival, The Edinburgh Film Festival and Portobello Film Festival where Gold won the Most Popular Overall Film Award. Future projects include developing large-scale films and installations combining performance, music and documentary subjects as well as making music video.