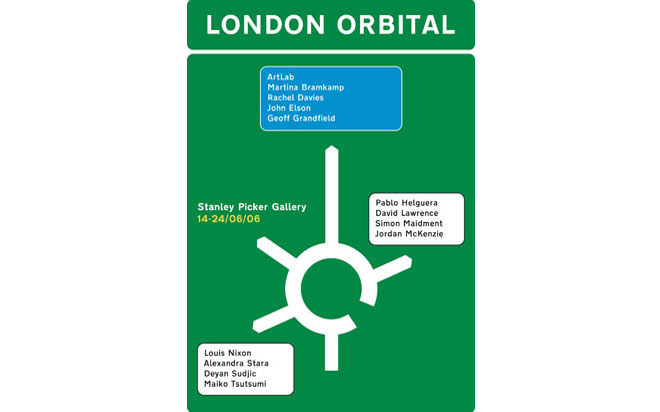 Within the orbit of Greater London, Kingston University’s satellite location affords it both the close proximity of vibrant city life and the tranquillity of its immediate suburban environment.

London Orbital coincided with the 2006 Graduate Degree Shows. Exhibitors included a network of leading practitioners whose own professional orbits bring them to Kingston from cities as near and far as London, Manchester, New York and Tokyo. As Lecturers, Research Fellows, PhD Students and Visiting Professors they each contribute to the Faculty of Art, Design and Architecture’s strong reputation for visual, material and spatial research practice. In this exhibition they offered their unique perspectives on issues relating to the design, habitation, transit, work and leisure of urban and suburban living. Mapping forms of contact between people, material and place, their diverse practices are informed by and engaged with patterns of behaviour in city life, from public transport and cafÃ©-culture, to domesticity and art world etiquette.

ArtLab (Cullinan + Richards) have exhibited widely in the UK and internationally including solo shows at Mobile Home and INIVA in London, Caltech, Los Angeles and the Schnitt Ausstellungsraum in Cologne. They currently lecture on the MA Art & Space programme at Kingston University. For London Orbital they produced a large photographic billboard piece related to a performance project in Cyprus.

Martina Bramkamp teaches on both the BA and MA programmes across Illustration, Animation and Graphic Design. She was part of the curating team of the Lomo Gallery in London and has worked as organiser and judge on Lomographic events in London, Tokyo and Vienna. Here she displayed a selection of dog lomos, carried out over a seven year period.

Rachel Davies was Associate Artist at The Place in 2002 and is currently a Researcher in Design at Kingston University. In 2005 she won the IMZ Dance Screen Grand Prix for her short film GOLD. Her next major project is due to premiere as part of the Manchester International Festival in 2007. She is now the John Thaw Research Fellow at Manchester University. Freefall in the Moment of Perpetual Accident was a collaboration with artist Barnaby Stone.

Pablo Helguera is a Mexican-born artist living and working in New York. He has exhibited worldwide and is currently visiting professor for MA Curating Contemporary Design at Kingston University. A Pablo Helguera Manual of Contemporary Art Style was launched at the Geffrye Museum in London in 2005 and was published in English in July 2006.

David Lawrence – acting Director of Design Research at Kingston University – is a regular contributor to radio programmes, research seminars and workshops. His recent works include studies of London Underground’s architecture and London Transport’s corporate identity. Here he presented a model from his forthcoming project exploring the life and culture of roadside dining establishments.

Simon Maidment is Director of Sam Design Ltd and has exhibited his work extensively, including the Crafts Council and the Design Museum London. In 2001 he was awarded the Peugeot Design Award for ceramic and glass. Recently appointed Head of BA Product & Furniture Design, his urban bird box – Tweeter – was a collaborative project with fellow designers Carl Clerkin, William Warren and Gitta Gschwendtner.

Jordan McKenzie’s work explores drawing and other processes of mark making in relation to the human body. He has exhibited throughout the UK and Europe and currently lectures on the BA Live Arts programme at Kingston University. For London Orbital he presented a new series of drawings produced whilst traveling on the London Underground system.

Louis Nixon’s film Rolling Barrel was produced in 2001. He has exhibited worldwide including the 10th Biennial of Visual Arts in Pancevo, Serbia and Whitechapel Project Space in London. He is currently acting Head of Fine Art at Kingston University.

Alexandra Stara has been involved in a number of wide-ranging research projects with themes relating to contemporary architecture and the city. For London Orbital she produced Ars Memorative Urbana, an exploration of memory and journey. She designed and now directs MA Architecture: Thinking Building at Kingston University.

Deyan Sudjic is architecture critic for The Observer and visiting professor at the Royal College of Art. He was Director of the Venice Architecture Biennale in 2002 and is author of 100-Miles City, Architecture Pack, and monographs on John Pawson, Ron Arad and Richard Rogers. For many years he edited Domus magazine and for a period was Dean of the Faculty of Art, Design and Architecture. He is now Director of the Design Museum in London.

Maiko Tsutsumi’s Scratch-Marked Tables form the practice-based element of her current PhD at Kingston University; The Poetics of Everyday Objects: An investigation into the embodiment of meanings in domestic objects. The work created for her MA Furniture Design (RCA) has been exhibited internationally and she currently works for Tomoko Azumi’s TNA Design Studio.