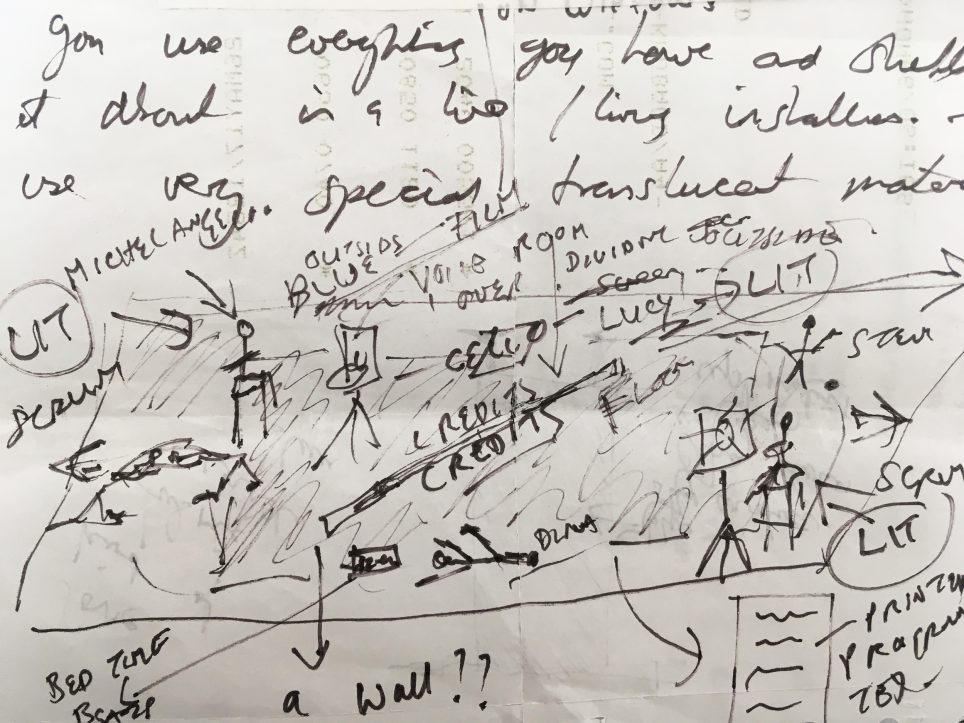 “Arriving from literature, theatre and a messy, unrequited love affair with Philosophy, OFFSHORE scripts fictional structures to let real life (non-fiction) in,” says Spooner. “It sits somewhere between a philosophy school for embodied knowledge, an engine, an alibi, a backroom, a rehearsal and some deliberate, unguaranteed, social plumbing.”

Over the past eighteen months, Spooner organised five trans-disciplinary gatherings with near fifty performers, writers, artists and thinkers – including from Kingston’s Centre for Research in Modern European Philosophy (CRMEP) – that laid the groundwork of OFFSHORE. The gatherings researched the labour of maintenance, transactions in Human Resources and use of living tools as well as the dynamics and discontents of the social body in relation to the performative standardisation and quantification of language or life. Coincidentally, OFFSHORE formed as a group of core cast to draft new vocabulary and terms of how to perform. Departing from the ‘business ontology’ of a present-day financial, corporate or neoliberal mindset, OFFSHORE operates through theoretical and fictional modes that are always just a few steps removed from reality.

Coinciding with its launch at Stanley Picker Gallery, OFFSHORE IN KINGSTON takes residency at Walmer Yard – a new building designed and crafted by Peter Salter in collaboration with Fenella Collingridge and programmed by the Baylight Foundation. Walmer Yard proposes to map a more empirical understanding of architecture, using tools from the fields of neuroscience, psychology and anthropology. A text by Lynton Talbot will be published in Walmer Yard’s annual yearbook, as an outcome of OFFSHORE’s residency, documenting how the experience of living at Walmer Yard may inform the practical and theoretical investigations of working together.

OFFSHORE IN KINGSTON is:

Cally Spooner is an artist and writer. Her most recent solo shows include Centre d’Art Contemporain Genève (2018), Whitechapel Gallery, London (2017), The New Museum, New York, The Stedelijk Museum, Amsterdam (both 2016). Her recent group shows include Serpentine Gallery and Kunsthaus Zurich (both 2017). Her book of Scripts is published by Slimvolume (2016), and her novel Collapsing In Parts is published by Mousse (2012). Upocoming solo shows include the Swiss Institute, New York, Castello di Rivoli, Turin (both 2018) and the Art Institute Chicago (2019).