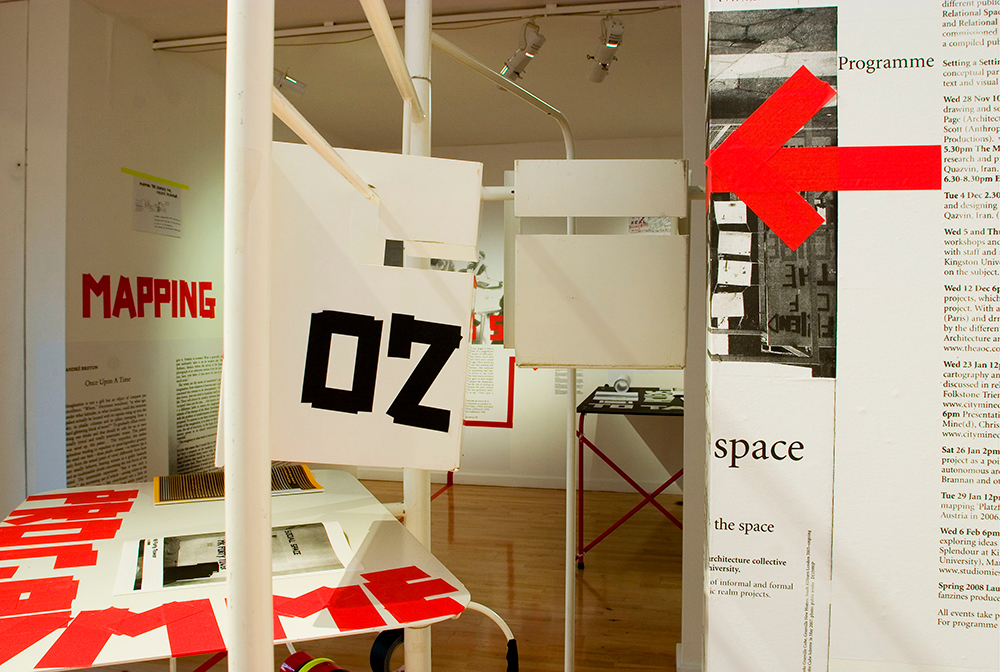 Can you Show Me the Space (installation view) 2007

public works is an art/architecture collective consisting of architects Sandra Denicke-Polcher, Torange Khonsari, Andreas Lang and artist Kathrin Böhm who have been collaborating in different constellations since 1998.

public works conceptual interest lies in the relationship between institutions who govern public space, and the users of those spaces. public works practice consists of implementing communication structures and physical structures that support and make use of existing local networks and resources, and at the same time offer, propose and stimulate new programmes and built structures.

Our projects run and refer to a variety of, scales from furniture (clear idea), public squares (matchmakers), Community centres (Picture High House) through to master planning (Geesthacht back to the river Elbe). Commissioners and clients include cultural institutions, individuals, local authorities and private developers. Integral to each project is a close engagement with the different user groups involved and participation on different levels is part in the overall processes.

We like to think of the project as prototypes. This can apply to the physical structure we conceive of or to the communicative or organisational mechanics of a project. They are prototypical in a sense that they set a new live reference that can be transferred to a number of similar situations.

Design is relevant on a number of occasions within a project and is always understood as aiding and supporting component to the overall process and ambition. Design to us is not only the shaping of the physical products that are being produced but also the way in which each project is set out, the processes it initiates and undergoes.

The tools we make for are deliberately ambiguous in their function and by no means are purely practical. We often describe them as ‘urban toys’ (Mobile Porch), suggesting that they are a tool that through play and informal engagement allows exploring and understanding of a public space or situation.

We are primarily interested in social spaces or the social potential of spaces and situations. In many cases our projects start on site, with us simply “hanging out”. Often we are equipped with tools developed by ourselves that position us on site, cause curiosity and help us get in contact in playful ways. We deliberately construct situations, which create an informal and often ambiguous interface between us and the people or user groups we are interested to meet. The acting on site on a 1:1 scale can manifest itself in many different ways and varies from project to project and from context to context. It is however not primarily a mechanism that enables encounters to happen. It is also a first testing ground for ideas. Small events or interventions that seamlessly blend into the everyday can test initial ideas and may serve as precedence later on in the process. Though in most cases the testing happens on a 1:1 immediate scale the situations very quickly reveal how issues are affected by larger scales and dynamics. (In turn they can also affect those scales). We believe that the informal everyday is integral to its surrounding formalised structure and therefore needs to be acknowledged as a shaping and transformative source)

Public works projects increasingly rely on a sustained on site engagement. This activity generates new networks and establishes or opens up social situations which in itself can be understood as a spatial construct. The acknowledgment of this idea is the base for our research proposal for the Stanley Picker Fellowship.

As a practice engaged in the public realm we are interested in the potential of everyday social structures and informal networks presented to us within different scales of public spaces. These networks and structures contribute to the diversity, richness and ephemeral conditions, which make public spaces key spaces within our cities. In order to work with the informal and everyday to reveal the hidden richness and complexity, our practice is continuously confronted with the need to document, visualise and represent them.

In current architectural practice these structures and networks are often neglected mainly because they are not immediately visible and don’t have a definite physicality. In our work we identified a real need to acknowledge these structures as intangible spaces and make their importance, part of the broader discussion on how we conceive designing of public spaces.

For the Stanley Picker Fellowship we want to concentrate on methods of representation and visualisation of informality, drawing out their spatial qualities and relations. We believe that within the current practice of architecture and public art it is important to think of social networks not only as means of communication but also as spatial relations, which construct a holistic design.

The fellowship research will allow us to conduct an in depth research into other practices from the field of architecture, art and design, who have developed techniques and mechanisms to map and represent spatial relations within informal structures ranging from cityscapes to neighbourhoods and private space. The examples can include a wide range of media, from drawing based notations, to video diaries, animation, time based maps, online data base, to spatial re-enactments.

The research aims to reveal the current degrees of understanding and acknowledgment of informal networks in contemporary discussions in the different design fields.

Historically the research will be located in 20th and 21st Century Art, Architecture and Design practice with a social ambition and a major concern surrounding the issue of the everyday.