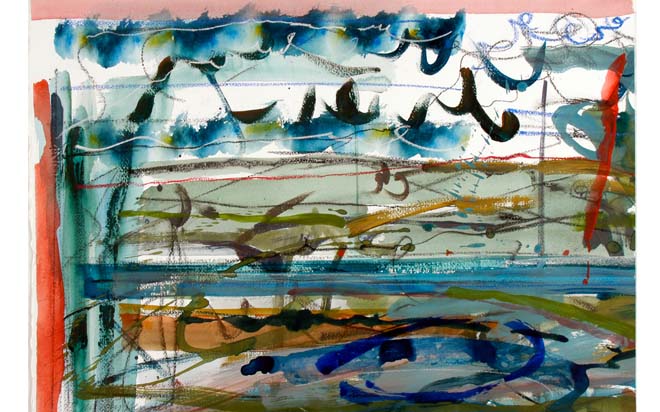 Jeremy Henderson, our very first Stanley Picker Fellow in 1977, sadly passed away in May 2009. He generously donated a new work to our Collection in 2007, which is now on permanent display at the University.

“To state the obvious these paintings are not careful delineations of picturesque landscape, they are essentially emotional and concerned with ideas about the nature of art and intended to stimulate and provoke rather than reassure”

“Henderson makes full use of the art of quotations; his images deliberately provoke 18th Century landscape conventions, as well as the Expressionist subjectivity of Jack B. Yeats. The painting’s titles bear the burden of differentiation. For instance, ‘A painting about to become a landscape or a landscape about to become a painting’ makes a neat conceptual point about the relationship between images and reality. Titles like these put a very specific slant on the paintings in as much as they direct the viewer towards a particular way of seeing – in this case a mode that is self-conscious, clever and ironic.”

“My recent work is concerned with the psychological process of object making. To create on canvas an open structure allowing aspects of the physical world or representations of it to emerge, so the paint may become invested with nuances of meaning.”