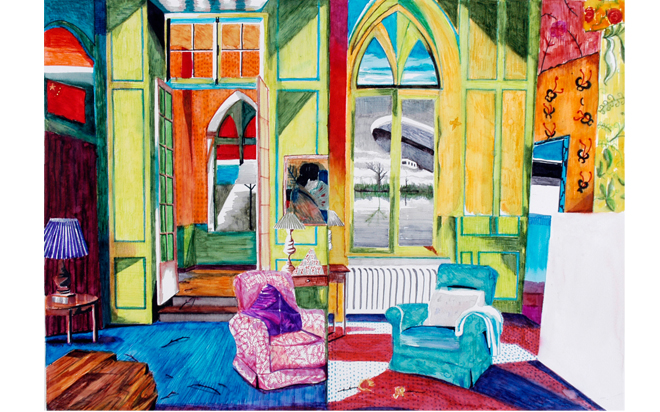 “In some respects Ian’s own practice has a very private quality to it. His work is not produced in relation to public or corporate commission, nor does he see himself in the role of political agitator in the mould of a Guy Debord or John Jordan. Within that context his chosen medium takes on a particular relevance. Paintings are, by nature contemplative things, and that is another one of the reasons Ian works in that medium. He also wants this work to belong to the history of painting, in the sense that historically painting has contributed to how society works for centuries, from Van Eyck (and before) to Manet, to Keifer and so on. So it is not a simple case of saying that painting is what he has always done, but that Ian has thought very carefully about achieving an effective synthesis between medium and subject and the ideas that underpin it.

Landscapes and interiors are suggestive of private worlds; ideas about nostalgia for a perceived past that reside within the imagination; veiled warnings that we should not assume progress to be an axiomatically good thing. Thus, superficially opulent interiors often sit in conflict or opposition to scenes glimpsed through windows, with a very strong sense that this ‘view’ is a very private one, both literally and metaphorically. Having said all that, the idea of progress is symbiotically linked to the idea of continual growth, that mainstay of capitalist ideology and, by extension, does put Ian’s work within a political and economic context. There is a clear allusion here to the dilemma of late Capitalism, so consummately outlined in Fredric Jameson’s exceptional treatise, ‘Postmodernism or the Cultural Logic of Late Capitalism’, where (to put it in a nutshell) he draws our attention to the fact that whilst Capitalism bestows enormous material benefits upon us it also delivers an equal measure of the very opposite. This dichotomy is partly alluded to in the paintings via their discreet structural disharmony in the paintings, in one instance looking like a combination of a decorators dust sheet and a page out of Frank Ghery’s sketchbook.”