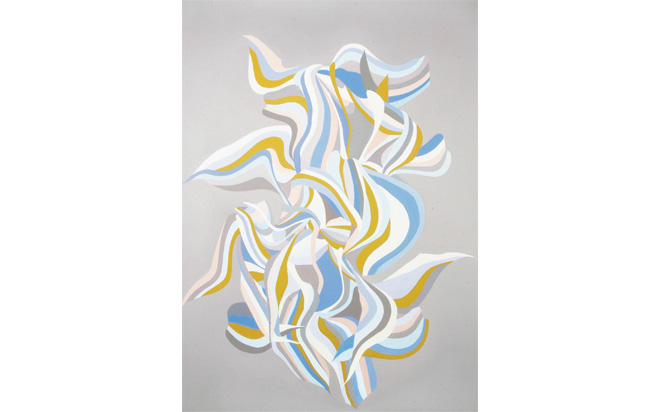 “The painted surface itself has become a pulsating patchwork of intricately interlocking colored shapes””units of sheer sensory impulse whose value demanded to be experienced haptically as much as optically. Ornate, flamboyantly twisting and swelling forms derived both from the observation of biological forms and nature and from studies of the way such forms have historically been translated into decorative schemata, for example in art nouveau, counterpointed determinedly flat color. Now, protuberant tendrils of color, twining biomorphic strands, stand out against a return of the monochrome ground, and in some cases these patches of color have given way to simple colored outlines.

In essence, Temin-Vergez has come to the realization that there is greater pictorial power to be derived from working neither with a classic figure/ground dichotomy in which self-contained shapes can be more or less clearly distinguished nor with the allover, in which this dichotomy is done away with, but rather with this more ambiguous situation in which a profusion of small-scale elements, somewhat elongated so that they seem at a halfway point between being shapes and lines, agglutinate into these diffuse yet not allover configurations that are, as the artist herself puts it, “forms without form, shapes without shape.

There is undoubtedly something seductive about these formless forms that remind us so strongly of things that we find decorative and beautiful but they harbor a subliminal sense of threat as well, because there is something inherently unnatural underlying their hallucination of naturalness. You want to keep your eye on them, at once for delight and from mistrust, until you finally can’t tell the two feelings apart.”