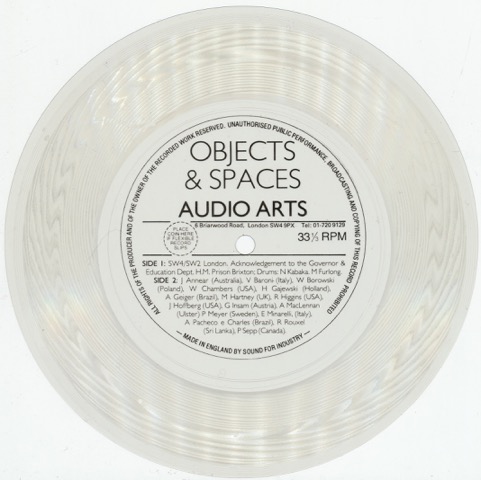 Recording and listening back to recorded speech has been a key form of engagement with Audio Arts magazine since the outset of the project in 1973 by artist William Furlong and collaborators. But what does change when the act of listening and playing back becomes a shared form of participation within the space of an archive?

Through a guided presentation of recordings presented in collaboration with Michael Archer, former editor and producer of Audio Arts, this sound seminar will invite participants to discover the early sound works created and produced by Audio Arts, including the Flexi-disc Object & Spaces (1983), the vinyl records Accent for a start (1988) and Head Low/The Difference (1987) as well as extracts from the seminal sound exhibition Live to Air (Tate, 1981).

The event is part of Activating Audio Arts Archive a research project in collaboration with Kingston University and Tate Archive, which investigates the history and the legacy of the Audio Arts magazine through the narration of four episodes constructed around the presentation of original material selected from its archive.

Michael Archer is an art critic on modern and contemporary art and, since 2009 Programme Leader BA Fine Art at Goldsmiths, University of London. He is the author of Art Since 1960 (Thames & Hudson 1997/2002, new edition forthcoming), and contributed the later chapters on modern and contemporary art to Hugh Honour and John Fleming’s A World History of Art (Laurence King 2009). In addition to a study of Jeff Koons’ One Ball Total Equilibrium Tank in the Afterall One Work series (2011), he has recently written on Miroslaw Balka, Dexter Dalwood, Helen Marten, Keith Tyson, Liam Gillick, Eva Rothschild, Cerith Wyn Evans, and the Politics of Minimalism. Michael Archer met William Furlong in 1977, and continued to work with him over the following decade and a half, most intensively in collaboration during the middle years of the 1980s. He was involved in the recording, editing and production of many issues of Audio Arts magazine, as well as Audio Arts’ own works – tapes, records, radio broadcasts, live multi-media events, performances and exhibitions. He has subsequently written on Audio Arts for monographs on the practice, and for exhibition catalogues relating to Furlong’s more recent work, and has in addition contributed to symposia on the subject.

Lucia Farinati is a PhD candidate at Kingston School of Art, Kingston University. She has recently co-published The Force of Listening, a book that explores the role of listening in the contemporary intersection of art and activism, Errant Bodies Press, 2017.