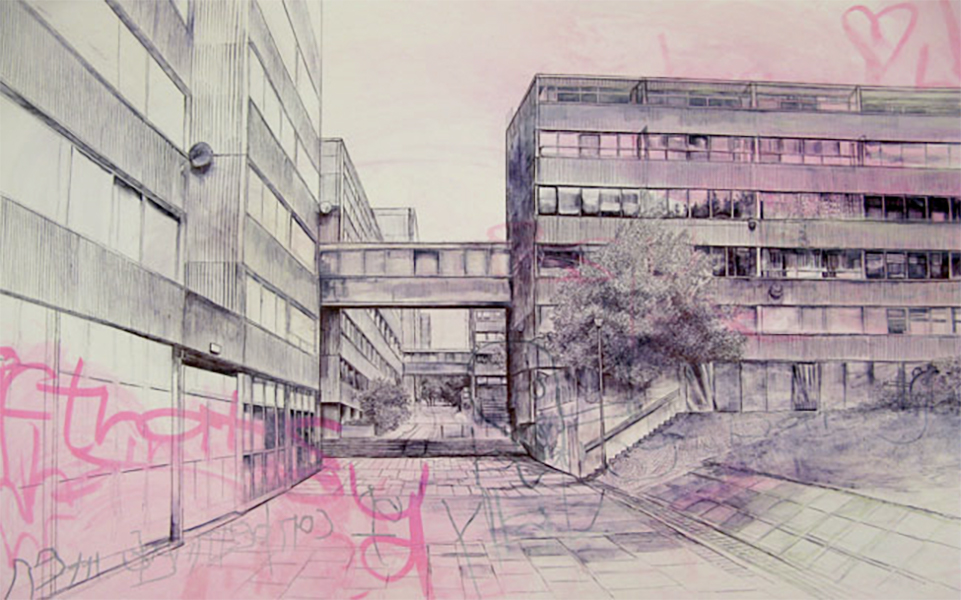 Current Stanley Picker Fellow Laura Oldfield Ford is one of the artists taking part in Ruin Lust, an extensive new survey exhibition at Tate Britain featuring a wide-ranging interpretation on the subject of the ruin in art from the 17th century to the present day, and including works by J.M.W.Turner, John Constable, Eduardo Paolozzi, Ian Hamilton Finlay, John Stezaker, Rachel Whiteread and Tacita Dean amongst many others.

A contemporary artist concerned with the politics of urbanism, architecture and memory, Oldfield Ford’s work makes a highly relevant contribution to this vast survey exhibition of diverse artworks which The Guardian newspaper has described as “brilliant but bonkers”. The exhibition runs at Tate Britain from 4 March until 18 May 2014.

Oldfield Ford is currently preparing a brand new body of work for her Stanley Picker Fellowship in advance of her upcoming solo exhibition at the Stanley Picker Gallery in Autumn 2014. For this new work she has expanded the inner-city interests for which she is best known, to include an investigation into the socio-geography of the suburbs, specifically within the old boundaries of the county of Surrey. The artist has recently been undertaking a series of walks investigating the immediate locality and wider context of the Stanley Picker Gallery. Looking at specific sites of cultural and socio-political significance this research is forming the basis of a new series of paintings and accompanying texts considering Surrey’s politically contested spaces.

Meanwhile, Stanley Picker Design Fellow Fabien Cappello is also currently participating in Design is a State of Mind, invited by designer Martino Gamper to contribute to the exhibition, now running at the Serpentine Gallery until 18 May 2014.