Judy Price in conversation with Mo Mansfield and Mandy Ogunmokun 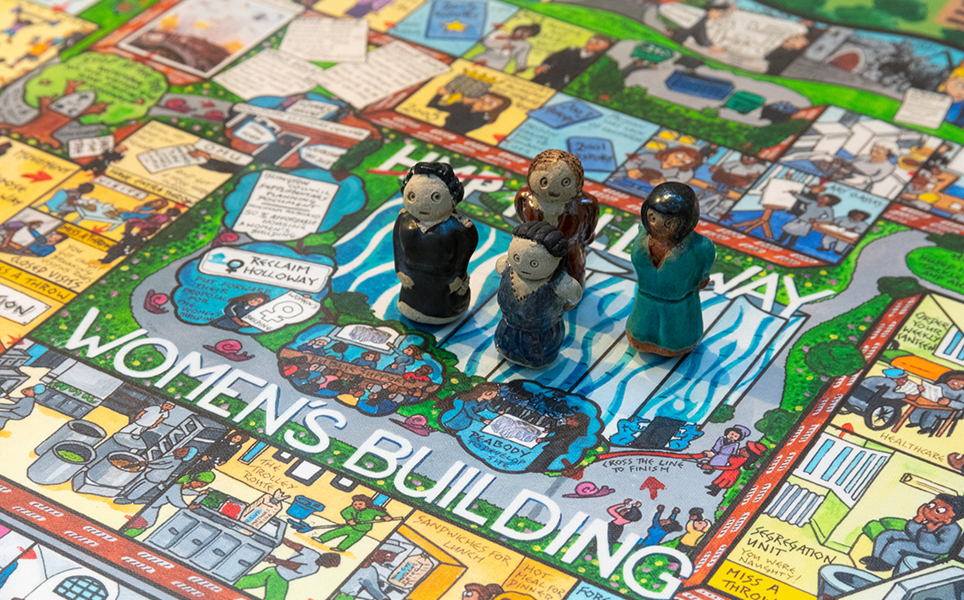 Judy Price in conversation with Mo Mansfield and Mandy Ogunmokun

To coincide with The End of the Sentence at Stanley Picker Gallery, artist Judy Price will be hosting an online conversation with Mo Mansfield and Mandy Ogunmokun about the issues affecting women in prison and the impact of the pandemic on this sector.

Since the closure of Holloway Women’s Prison in 2016, Price, Mansfield and Ogunmokun have been involved in the coalition group Reclaim Holloway, which has been actively campaigning for a Women’s Building to be included in the redevelopment of the former prison site. Reclaim Holloway have been working closely with Islington Council, the Community Plan For Holloway (CPFH) and grassroots organisations on the Women’s Building – a service hub helping vulnerable women stay out of the criminal justice system, a transformational space for the local community, and a positive legacy for the thousands of women held in Holloway prison over its 164-year history.

A recording of the conversation between Judy Price, Mo Mansfield and Mandy Ogunmokun can be found online.

Mo Mansfield is a community organiser, advocate and feminist campaigner for prison abolition.  She has over 15 years experience working in the voluntary sector in both front-line and management positions at organisations such as Women at WISH, Women In Prison and the Women’s Resource Centre and currently works on Family Participation at INQUEST. Much of her work has focussed on providing independent support to criminalised women from a social justice perspective.  She is member of the Reclaim Justice Network; Reclaim Holloway; and is co-founder of the Holloway Prison Stories website. Mo was also part of the organising committee for Abolitionist Futures: the International Conference on Penal Abolition held in London in June 2018. Mo recently completed a MSc focussed on improving services for people with personality disorders. She is also a Visiting Research Fellow with the Harm and Evidence Research Collaborative at the Open University.

Mandy Ogunmokun joined the Rehabilitation of Addicted Prisoners Trust in September 2005 as a CARAT worker in HMP Holloway offering support in all areas of social issues as well as substance abuse. She became a senior worker within three years organising her own team of staff. Mandy has used her own journey of drug addiction and prison to inspire and motivate others and became an ambassador for both the Rapt Carat Team and the Phoenix Futures Interventions. In 2012, Mandy was awarded the honour of carrying the Olympic Torch to the Guildhall Hall and in 2013, she earned a Commendation from the Butler Trust for her dedication and skill in addressing the needs of women prisoners with substance misuse problems, going “above and beyond her role” to provide guidance and help for the women at HMP Holloway. In 2011, she established the Treasures Foundation to aid women with substance misuse issues and housing needs. Three years later, her tenacity and vision created three connecting houses in East London that are staffed day and night to provide continuous individual support for up to nine women. Mandy continues to connect with women’s prisons and help women find the treasures in themselves.

Judy Price is a London based artist who works across photography, moving image, sound and installation. A focus of her work is how art can create new perceptions of the experiences of individuals and social groups and arts’ effectiveness and relevance to collective struggles. Her practice involves extensive field research where she often draws on images and sounds from archival sources as well as from a sustained study of a place to explores sites and locations that are interweaved and striated by multiple histories, economies and forces. Palestine was an enduring focus of her work from 2004-2017.  She is course leader on the Photography (MA) at Kingston School of Art and is a senior lecturer in Moving Image (BA) at the University of Brighton. Solo exhibitions include Mosaic Rooms, London; Danielle Arnaud Gallery, London; Wingsford Arts, Suffolk; Stiftelsen 3,14 and USF Centre, Bergen, Norway. Group exhibitions and screenings include Delfina Foundation, Imperial War Museum, Barbican, Curzon Cinema Soho, Curzon Cinema Goldsmiths, ICA, Whitechapel Gallery. Price is an active member of Reclaim Holloway.

Judy Price The End of the Sentence | Exhibition