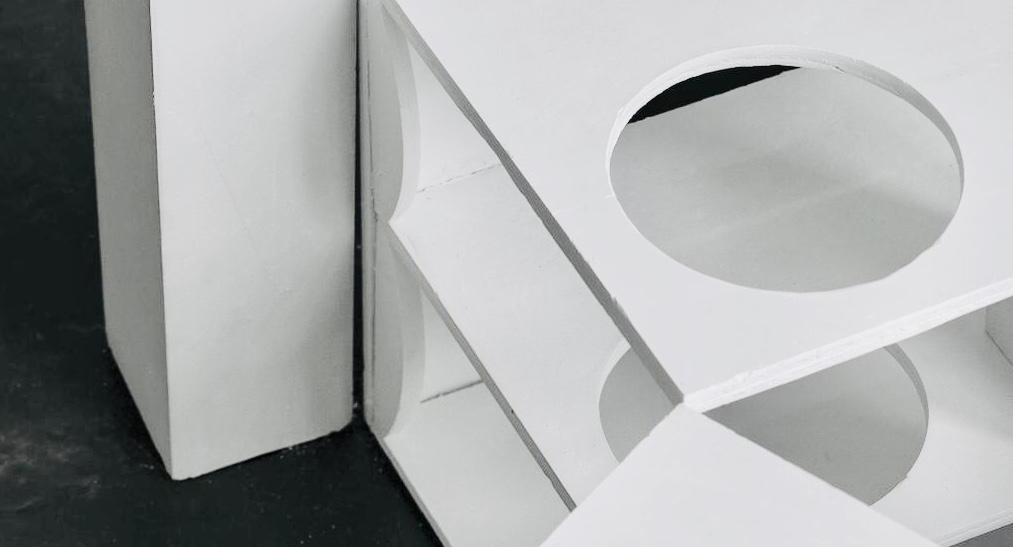 Stanley Picker Gallery is pleased to be hosting Kingston University BA Architecture students, as they complete construction and install new pieces created as part of their Tectonics Module, taught and led by Nicholas Lobo Brennan and Matthew Phillips.

Architecture is thought through its making. Tectonics is where the thoughts of a designer meet the practical issues of bringing something into existence. This module aims to frame these material issues not as problems to be addressed at the end of a spatial design process, but rather as opportunities and potential primary drivers of architecture.

The making of an architectural project requires material research and testing, the preparation of shop (construction) drawings, time planning, costing, delivery and preparation of final construction materials, and assembly of those materials. It requires not one person but the collaboration and co-ordination of many in a team or series of teams. Once the build is finished, it requires recording through photographs and final publication drawings gathered into finely judged documentation.

For this module, the students have been asked to undertake a miniaturised version of the process of making architecture, driven by material and structural ideas. They have formed groups where they become designers, draftspeople, project managers, quantity surveyors, engineers and builders. Within their groups they have formed specialities (drawing, prototyping, material research, documentation, project management), changing roles as they move from pre-construction to construction, then to post-construction (the studio workers become craftspeople, the material testers become construction teachers, all finally become curators and publishers). The result is one 1:20 architectural object per group, each a study of a particular material, structure and set of architectural elements.

We have asked the students grow their thinking out of making; without site, context or use. As such, each group is given a highly constrained brief of a volume (0.2m3), a reference project, a form (towers, vertical and horizontal slabs, cubes) and a material to start off their project with. From here they were asked to structure their volume as 1:20 space, fabricating each of the primary elements of the architecture (walls, floors, columns and so on). The final constraint was that the structure should follow a principle that – though stable – expresses a form at the edge of stability. This allows for the investigation of the relationship between a material and its thickness and weight, rather than relying on (ill-considered) heavily glued, screwed and over-dimensioned solutions.

The students have been asked to take a critical stance on how to include practical circulation and usable space. Some models show a detailed staircase, others only suggest where one might go. In some cases, students have invented their own uses for the spaces along the way, expanding on issues such as where plumbing or glazing might go.

Unlike making a representational architectural model of card and paper, which requires no significant additional steps between the cutting of elements and gluing on to the model, we asked the students to work with ‘real’ materials. These are heavier or less stable than typical model materials, they are materials that bend, crumble, or have significant mass and weight. This leads to the process being closer to that of full-scale construction, in which jigs, formwork, or scaffolding are often necessarily employed as part of the transformation of materials from their raw state to when they are installed as part of the structure. We asked the students to work with what the materials can do and let this be a part of what guides them to their final objects.

The exhibition is the result of a term of work by second year architecture students. This is the first course that forms part of the new tectonics teaching and research within the school led by Associate Professor Nicholas Lobo Brennan.