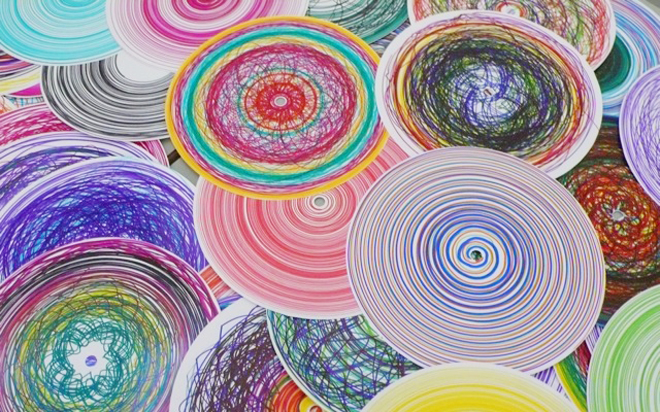 Vibrant Picture Disc Designs made by visitors during a live performance by Andy Holden, Daniel Eatock and band Ice Sea Dead People, 8 May 2012

Creative Review online are currently profiling a unique project initiated earlier this year by two of our Stanley Picker Fellows Andy Holden and Daniel Eatock who worked together to create the new 7″³ vinyl limited edition for the band Ice, Sea, Dead People.

Now the Stanley Picker Gallery and Lost Toys Records are delighted to announce the release of the double a-side 7″³ picture disc for the band’s tracks ‘You Could be a Model’ and ‘Ultra Silence’.

The picture discs were made as the result of a collaboration between the band with Stanley Picker Fellows Andy Holden and Daniel Eatock. Eatock’s concept to spin paper discs on turntables with pens being held down on them for the duration of the music on each corresponding side, was born into fruition at the Stanley Picker Gallery in May 2012, when the band played each song 10 times consecutively whilst music lovers and participants from the local community drew on the paper discs as they rotated before them. 180 discs were pressed into records with each side of every record a unique. The video for the single was filmed at the event by by Kingston University BA Film making students Aris Maleas, Vasia Ntoulia and Vincent Descourtieux.

Click here to watch the music video and  pre-order a Picture Disc
Click here to read the article on the Creative Review Blog
Click here to listen to an Ice, Sea, Dead People interview on BBC Radio 6 Music