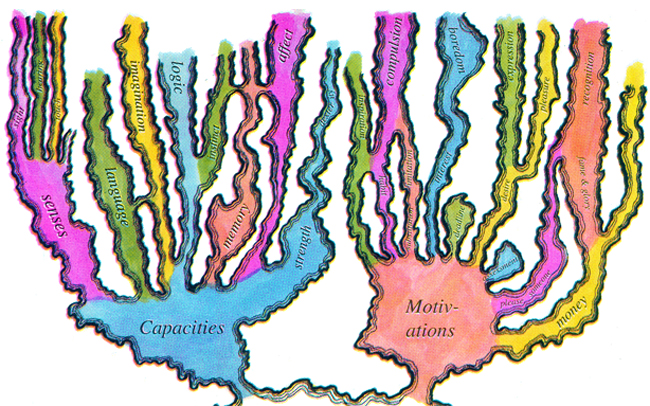 Social Body Mind Mapping is a diagrammatic tool to enable critical reflection on one’s (previous, current or future) artwork with respect to unconscious process and social forces. Unlike a usual ‘mind map’, the Social Body Mind Map begins not with a named topic, idea, or person (‘me’), around which a map forms, but from an ‘unknown’, ‘alien’ object which resists immediate articulation. This mysterious thing is the artwork.

Through this creative thinking tool, art manifests a capacity to open up different ways in which we, as desiring individuals, connect to, and are caught up in, intricate social networks of influence and possibility. Key to this capacity is a necessary shift away from the idea of a ‘self’ as a pre-established identity from where artworks spring (whether from a brain, innate talent, personality, cultural background, etc.), and away from artistic projects that serve to reinforce already known identities by steering expression and personal interest back to a self. Genuine thought is never transparent to itself, and in this sense it is the artwork, rather than the artist-subject, which ‘thinks’.

The maps made for this exhibition are risograph prints, which can be witnessed both in framed and in folded, handleable versions. Each student’s map represents an idiosyncratic visual exploratory journey towards and beyond their individual artwork, taking account of the various capacities, motivations, resources and organisations that have helped bring it into existence.

Dean Kenning is an artist, writer and Research Fellow in Fine Art at Kingston University. He has shown work at the ICA, BAK and the Whitechapel Gallery and has written for journals such as Art Monthly, Third Text and Mute. At Kingston he has published a series of booklets based on transcripts from the Stanley Picker Public Lectures series.