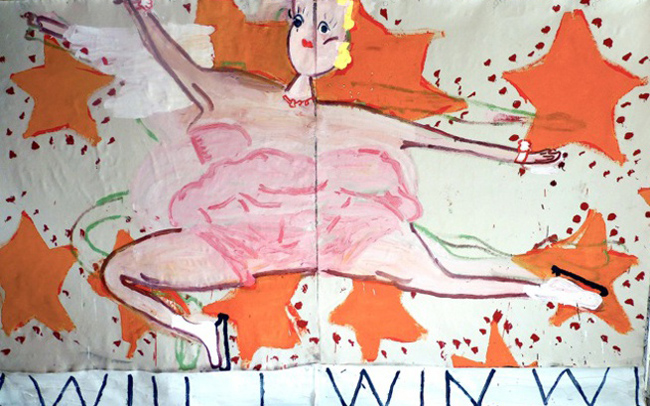 Rose Wylie Pink Skater (Will I Win, Will I Win…) (detail)

The ICA is collaborating with the Contemporary Art Research Centre at Kingston University to host this year’s Stanley Picker Public Lectures on Art, generously supported by the Stanley Picker Trust. The programme was established in 2007 by the artist Elizabeth Price, previous Stanley Picker Fine Art Fellow and winner of the Turner Prize 2012, and is intended to provide a platform for prominent contemporary artists and thinkers to present their ideas and work to a public audience.

Rose Wylie Tuesday 12 May 6pm
Rose Wylie went to Folkestone and Dover School of Art (1952-1956) and later attained a postgraduate degree in Painting from the Royal Academy Schools London (1979-1981). Her imagery references current affairs and the media, as well as a diverse range of sources including ancient wall paintings, art history and film, celebrity culture, even football. She predominantly paints on large un-stretched, un-primed canvases, working on a number of paintings simultaneously. In May 2014, Wylie exhibited new and recent work at Tate Britain and in 2010 she was included in the Women to Watch exhibition at the National Museum of Women in the Arts in Washington, which promotes underrepresented and overlooked female artists.

Sophie von Hellerman  Tuesday 19 May 6pm
Born in 1975 in Munich, Sophie von Hellermann studied at the Kunstakademie Dusseldorf and the Royal College of Art, and now lives and works in London. Her subject matter ranges from Emily Bronte’s Wuthering Heights to Einstein’s revolutionary physics to the life of Nico from The Velvet Underground, subjects she portrays with the same token lightness, blurring public fable with romantic vision. In von Hellermann’s works, personal narratives and fantasies are the product of desire and partial perceptions, bleeding into one another within a figuration characterised by ambiguous moments and abstract spaces.

Gavin Turk Wednesday 3 June 6pm
Gavin Turk’s installations and sculptures deal with issues of authorship, authenticity and identity. Concerned with the ‘myth’ of the artist and the ‘authorship’ of a work, his engagement with this modernist, avant-garde debate stretches back to the ready-mades of Marcel Duchamp. Turk uses his signature as a recurrent motif through which to explore the way an artist’s mark can embody aesthetic and commercial value.  In 1991 the Royal College of Art refused Turk a degree on the basis that his final show, Cave, consisted of a whitewashed studio space containing only a blue heritage plaque commemorating his presence ‘Gavin Turk worked here 1989-91″². Instantly gaining notoriety through this installation, Turk was spotted by Charles Saatchi and has since been exhibited by many major galleries and museums throughout the world.

Doug Ashford Tuesday 16 June 12pm
Doug Ashford is a teacher, artist and writer. He is Associate Professor at The Cooper Union for the Advancement of Science and Art where he has taught three-dimensional design, sculpture, public art and theory seminars since 1989.  In 1981 he became a member of the artists’ collective Group Material, his principal art practice until 1996. Group Material produced over fifty exhibitions and public projects internationally, using museums and other public spaces as cultural arenas in which audiences were invited to imagine democratic forms.  Prominent in this history are the exhibitions:  The Castle  (documenta 8, Kassel, Germany, 1987),  Democracy  (The Dia Art Foundation, New York, 1988) and  AIDS Timeline  (The Berkeley Art Museum 1989, Wadsworth Atheneum, 1990, The Whitney Museum, 1991). Group Material’s work in exhibition production, public cultural display, and the aesthetic mobilization of politics continue to affect the world of visual culture and other disciplines.  Since 1996, Ashford has gone on to make paintings, produce exhibitions and publish articles independently, with his creative labor primarily located in the classroom.

Further information and booking from the ICA.