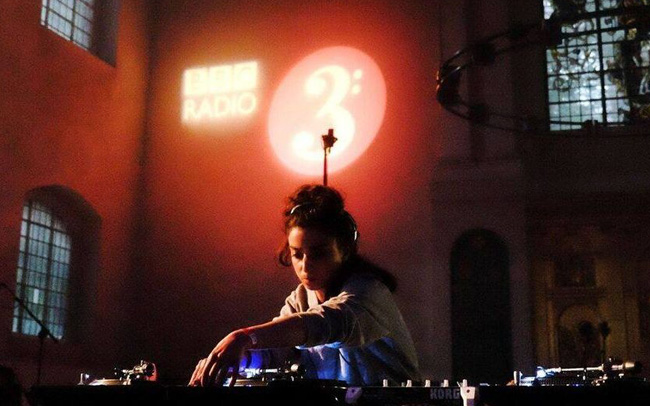 Joins us for composer, DJ/Turntablist, and Researcher Shiva Feshareki’s presentation on her compositional practice and research. Her talk, which is developed specially in response to the architectural interventions included in the current exhibition, will be hosted within the main galleries and focus on the relationship between sound and physical space. Feshareki was recently part of the Uniqlo Tate Lates series hosted by NTS Live.

When working with electronics, Feshareki focuses on analogue and bespoke electrics that generate ‘real’ and pure sounds of electricity, over computer products. With acoustic instruments, her work is concerned with the interaction of tone, orchestration, texture, architecture, movement and space. Her turntabling practice can be described as a manipulation of pre-recorded sound to create new gestural movements and textures not always apparent in the record being manipulated.

Looking specifically at the projects she has completed in recent years, as well as her recently completed doctoral research, Feshareki’s presentation will give an overview of her bespoke turntabling practice, her collaborative work with artists such as Haroon Mirza, as well as her realisation of Daphne Oram’s concert piece Still Point (1949), which is one the first examples of a composer using space as well as manipulated electronics in a composition.

Born in London in 1987, Shiva Feshareki won the BBC Proms/Guardian Young Composer of the Year 2004, with her first penned composition. A scholar and composition graduate of the Royal College of Music under the tutelage of composer Mark-Anthony Turnage, Feshareki later partook in doctoral research with the generous support of the Douglas & Hilda Simmonds Award. Since 2013, she works mainly as a collaborative composer, and uses deep improvisation, explorations into different worlds, or chance events, to create her collaborative teams. She has performed at major UK venues such as the Southbank Centre, Royal Festival Hall, Royal Albert Hall, Barbican, Roundhouse etc, and has working relationships with the London Philharmonic Orchestra, London Philharmonia, London Sinfonietta and London Contemporary Orchestra etc. Additionally, she has worked and toured with musicians ranging from cellists Natalie Clein, Oliver Coates and Colin Alexander, to left-field pop artist/composer Mica Levi, songwriter Laura Marling, video-gamer/youtuber Freddie Wong, jazz organist Kit Downes and artists Simon Fisher-Turner and Haroon Mirza. Following the international success of her most recent NTS radio show, Shiva will be starting her regular monthly show for NTS Radio titled “NEW FORMS” focussing on physical and experiential music from any genre, and warping them with live turntable manipulations. As a researcher, Shiva will be writing her first book chapter on Daphne Oram’s Still Point in collaboration with James Bulley published by Oxford University Press. Future commissions include a large-scale orchestral work for the London Contemporary Orchestra commissioned by London Music Masters.