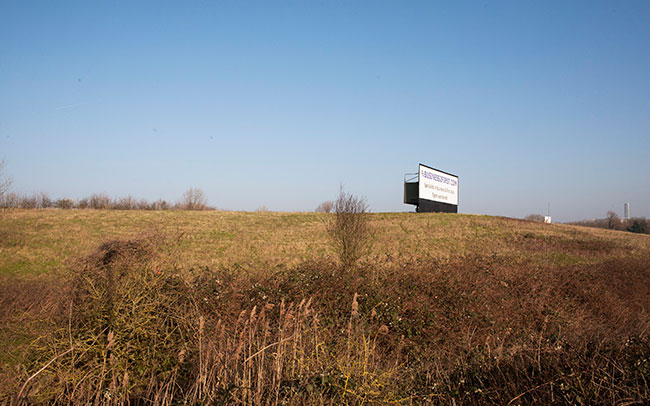 The Mobile Landscape 2014 Courtesy the Artist

Artist Nick Ferguson will present The Mobile Landscape (2014), an artwork that takes the form of a talk and slideshow in the Stanley Picker Lobby 5-7pm on Wednesday 13 May 2015.

In search of a site for a public art project, the artist takes the viewer along rural stretches of the motorway to inspect a series of roadside advertising hoardings in South East England. They are the type mounted on obsolete transport infrastructure and which are strategically positioned on agricultural land. As the hoardings are surveyed for their potential, there emerges a political history of the view from the road: of a countryside sculpted by the comings and goings of capital; of rural aspirations and anxieties; of clandestine livelihoods sustained by proximity to the road.

The performance will be followed by a short discussion chaired by Dr Paul Micklethwaite.

Nick Ferguson is a London-based artist and writer, whose research and practice span art, urbanism and political philosophy. His practice examines the political histories of built environments – rural, urban and maritime. Through fieldwork, modelling, building, talking and writing, it engages with the way that territory is acquired, organised and used. There is a concern with landscape, the picturesque (especially as played out in suburbia), and the relationship between vision and possession.

Ferguson’s writing focuses on the role that contemporary art has played in the construction of the built environment more generally: in the aspiration for a more democratic distribution of places through aesthetic forms and social events; in the expectation from art’s state, private and corporate investors of return; in art’s presentation of local histories for scrutiny and interpretation in the public domain. He has recently completed a practice based PhD in Art at Goldsmiths, University of London.