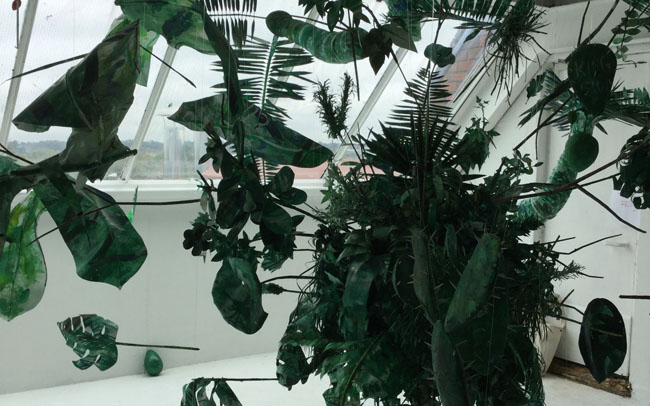 This exhibition occurred with the historic event of a EU membership referendum in the UK, with a vote to leave. Students from ten different countries could not ignore this event in their final exhibition. So in the aftermath, and in a new landscape of volatile reactions and political unrest, they set about their task by making DaDa poems and using free association and group exercises, in response to sets of controls. Word mixes emerged, evoking: borders, cities, homes, work, and education, travelling, splitting, sharing and belonging. Proposed titles included: Border Beach, Jukebox Skyscraper, Ever Island, and Salad Bowl Resistance. This resulted in the decision to borrow a Lawrence Weiner work as a title. This was a homage but also recognising something potent which is greater than the moment, that is, the legacy of conceptual art that has cut radically into history and recognises the powerful and embedded relationship of thinking, making and politics.

In this contemporary moment, of summer 2016, actions, space, speech, listening and the relationships between these, might be referred to as Affect or Relational Aesthetics. Artists in this exhibition operate within a discursive mode of praxis, operating with whatever systems and materials are available. These might be: their studio in a converted pub, complete with back yard, neighbours, cat and street events; or learning with radical artist led practices in and out of London; the world class department of European Philosophy: extensive workshops for construction, carving, engraving and printing: left over and found materials on site or from their own histories, archives or travel. They have also pioneered use of a new Risograph printing system, for this catalogue.

Contemporary systems are unavoidable and embedded in our lives and us in them. With a background of institutional critique including Judith Butler and Foucault, artists here recognise the importance of constructing and participating in their own or alternatives systems. So though like Art and Language, they use concept, title and instructions, they see, that how their practice emerges, might be as important as the exhibited result. A resonant text put forward as important to the group title, referencing historical conceptual practice but also time and place in current affairs, was Chris Kraus’s: I love Dick:

This also recognises the subjective stories that artists as actors bring to the process of exhibiting:

In one artist’s film and sound work, an imagined telephone conversation is constructed with her dead mother using the voice of Julie Andrews (as Maria Von Trapp a substitute mother in the sound of music). In another installation a family, generational archive of women are documented, in furniture, clothes, photos and gestures.

A school bus is brought and taken on a landscape journey, using a Situationist method to allow work to emerge and the accident or failure, to take a place. Kraus’ Where Art Belongs is sited here. In another, vessels and totems, mark a passage of abject symbolic material. One makes portrait installations, in a search for identity having lived in many countries and cultures. Bauhaus is referenced in another work as a way of re making a set of modernist paintings as three-dimensional.

Use of Feminism and the Semiotic sees an artist making wallpaper and a saturated studio or another referencing a letter from Sol le Witt to Eva Hess urging her to just DO and exploring ethnicity and memory. Another artist’s work is titled Tea and Scones Drive Through, referring to Barbara Hepworth having nursery tea with Mondrian.

Dada critiqued war, art and western civilisation. Tzara, in instructing, To Make a Dadaist Poem (1920) says: Take a newspaper. Take some scissors. Choose from this paper an article¦Cut out the article¦ cut out each of the words that make up this article and put them in a bag. Shake gently. Next take out each. Copy conscientiously, in the order in which they left the bag. The poem will resemble you. And there you are, an infinitely original author of charming sensibility, even though unappreciated by the vulgar herd.

Artists in this exhibition embrace chance, charm, and vulgar herd, in a poetic response to a group concept, collaboration and history of now.