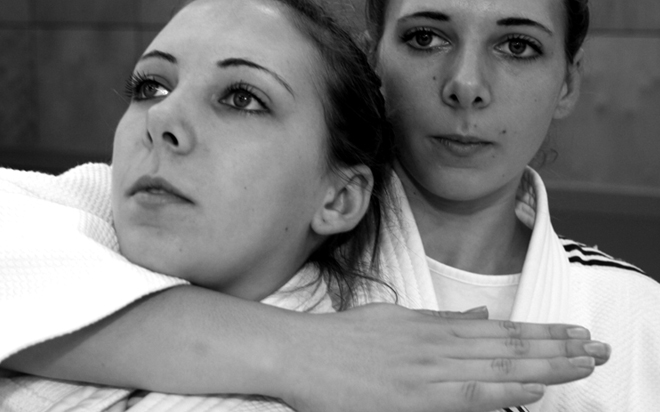 Part of the Stanley Picker Gallery’s offsite programme No Competition! during Spring/Summer 2012, Ian Whittlesea’s film The Demonstration of Gentleness was premiered at the Studio Cinema BFI Southbank, staged in collaboration with Marlborough Contemporary, and is now viewable here online. Please note: It is intended by the artist that the piece be viewed online, as it appears, in standard Vimeo format and not enlarged to full-screen.

In the short film, identical twins Helen and Kathryn Cartwright are seen demonstrating the Ju-no-Kata, a choreographed pattern of judo movement. The film references artist and judo devotee Yves Klein’s Les Fondements du Judo (The Foundations of Judo), published in 1954 and translated into English by Whittlesea in 2009. The Demonstration of Gentleness was filmed at Croydon Dojo with the support of the British Judo Association, and with a crew including Kingston University film-making students Yoyo Zhao Siyu, Henry Gray and Ella Marshall Dutton.

Together with his publication Mazdaznan Health & Breath Culture, Ian Whittlesea’s The Demonstration of Gentleness forms part of No Competition!, a programme of free off-site events exploring the relationship between art and non-competitive sport, commissioned and staged by the Stanley Picker Gallery at Kingston University whilst the venue is closed for refurbishments.