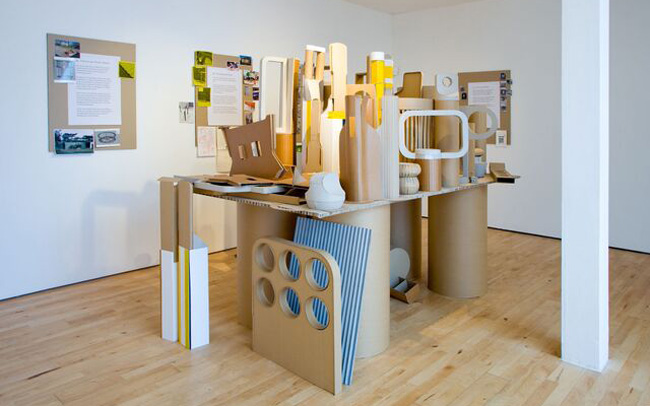 Stanley Picker Fellow Fabien Cappello is one of the designers selected to display a collection of objects as part of Design is a State of Mind,  an exhibition guest-curated by Martino Gamper running at the Serpentine Sackler Gallery until 18 May 2014.

The exhibition presets a series of shelving systems, dating from the 1930s to the present day, each displaying a collection of objects from the personal archives of Gamper’s friends and colleagues. Cappello’s collection consists of a series of bowls which are  displayed on Alvar Aalto’s 112B shelves. He says of his collection: “For some reason I tend to have a lot of bowls…I never really decided it was going to become some sort of collection, but it did. I love to eat food from them and use them to display fruits, nuts and vegetables. All of them are from different places”.

Also participating  in Design is a State of Mind is previous Stanley Picker Design Fellow  Daniel Eatock  whose exhibition One + One was shown at the Stanley Picker Gallery in 2012. Eatock’s collection of  Empty Drinking Glasses  he describes as an  ‘unmatched  set of glasses is united by its  identity as ‘packaging’ that  once contained food items, the  collection plays on the appeal  of getting something for nothing’.

Fabien Cappello will also be exhibiting at the Milan Furniture Fair as part of a group of six designers selected by Martin Gamper to develop new pieces for four Italian based producers. All the projects are ready for production and will be presented to  distributors, editors and retailers during the fair (8-13 April 2014).

The designer is also taking part in useful+beautiful at the Geffrye Museum London (29 April-25 August 2014). Presenting a mix of ‘mass produced, batch produced, handmade and experimental pieces’, the exhibition will showcase a broad range of domestic products including furniture, textiles and lighting designed by established industry figures and emerging talent, highlighting local design from Hackney and London, and from further afield in the UK and abroad.

Design is a State of Mind – Serpentine