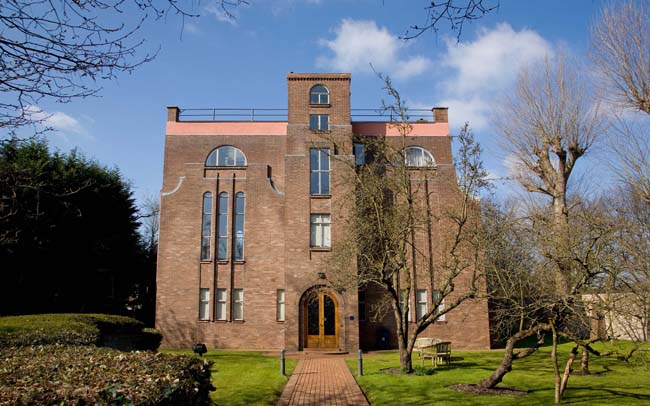 “One of London’s Hidden Gems”

Penelope Curtis, the former Director of Tate Britain and now Director of the Gulbenkian Museum Lisbon, recently attended the relaunch of Kingston University’s Dorich House Museum, the original studio home of the Russian sculptor Dora Gordine (1895-1991) and her husband the Hon. Richard Hare (1907-1966). Now Grade II listed, the building was completed in 1936 to Gordine’s design, and is an exceptional example of a modern studio house created by and for a female artist. In her speech Penelope Curtis acknowledged that ’to be able to see [sculptural] figures inside an architecture designed by a sculptor herself is really a remarkable opportunity’.

Gordine first achieved critical acclaim in 1926 when her bronze Head of a Chinese Philosopher (on display at Dorich House) was exhibited at the Salon des Tuileries in Paris. Talented, charismatic and dedicated to her art, she was hailed in 1938 as ‘possibly the finest woman sculptor in the world’ and remained a significant presence in European sculpture until the late 1960s. After settling in Kingston in 1936 she remained living and working at Dorich House until her death in 1991.

Richard Gilbert Hare was the second son of the fourth Earl of Listowel. Educated at Oxford, the Sorbonne and Berlin University, he developed a lifelong interest in the study and collection of Russian art and culture. Following a brief career in the Foreign Office, Hare spent the war working for the Anglo-Soviet Relations Division of the Ministry of Information before becoming a Professor of Russian Literature at the School of Slavonic and East European Studies at the University of London.

Following Gordine’s death Dorich House was acquired and renovated by Kingston University. Members of staff from the university’s Faculty of Art, Design and Architecture have since collaborated to establish Gordine’s professional life and work, leading to the retrospective exhibition Dora Gordine: Sculptor, Artist, Designer and to a monograph and catalogue raisonné of the same name.

Now a fully accredited museum, Dorich House Museum holds the world’s largest collection of Gordine’s work and an important collection of Russian art and artefacts, acquired by Gordine and her husband. The collection of Gordine’s work spans her early years in Paris in the 1920s, her time in Singapore, Malaya, Thailand and Cambodia in the 1930s, and work completed in the Dorich House studios from 1936. Visitors to the house can see this work on display in the spaces in which it was created, a ground floor plaster studio and an impressive first floor modelling studio with a fine gallery adjoining. Also open to the public is the couple’s top floor apartment and roof terrace, with sweeping views across Richmond Park and south-west London. Gordine’s work is also held in the national art collection and can be seen on display at Tate Britain.

In the spirit of Gordine’s exemplary life and career, the Museum was re-launched this autumn as an international centre to promote and support women creative practitioners. To further this aim, the Museum has established the Dorich House Fellowships. Artist Hilary Lloyd was appointed the inaugural Dorich House Fellow in autumn 2015, and will be making new work in response to the house and its collections over the coming year.

In conjunction with the Museum’s re-opening, a special exhibition at the Stanley Picker Gallery entitled Dora (8 Oct – 28 Nov 2015), shows key works by Gordine personally selected by a group of major contemporary artists, Fiona Banner, Cullinan Richards, Hilary Lloyd and Nicole Wermers. Each artist presents works of their own alongside that of Gordine, to reflect upon her artistic legacy.