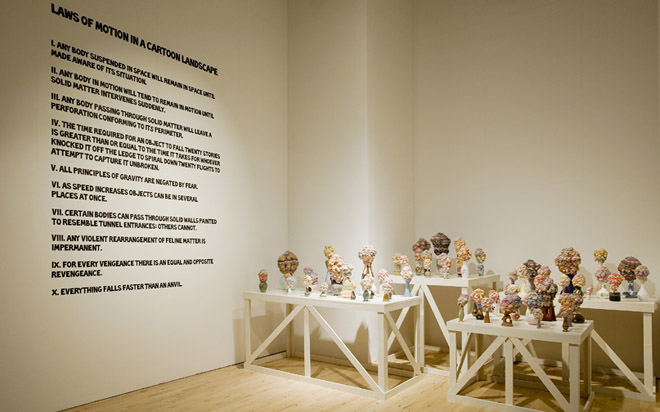 Laws of Motion in a Cartoon Landscape (installation view)

Stanley Picker Fellow Andy Holden and curator Tyler Woolcott are presenting a revised version of their lecture Laws of Motion in a Cartoon Landscape at Swedenborg House, Bloomsbury, London, on Thursday 31 January at 8pm. First performed at Kettle’s Yard Cambridge, the lecture has been developed into exhibition form over the course of Holden’s Fellowship, currently showing at the Stanley Picker Gallery until Saturday 2 February 2013.

Laws of Motion in a Cartoon Landscape is a reworking of the laws of our physical universe to make sense of the ‘gooey space-time’ of the world of the cartoon, and which Holden aspires to become a “manifesto for art in a world after the end of art-history”. The exhibition elaborates on this cartoon-thesis with a display of visual research exploring the logic of cartoons – “Anybody suspended in space will remain in space until made aware of the situation”, “Everything falls faster than an anvil” – alongside a comprehensive selection of recent works made from plaster, clay, knitted textiles, screen-printed collage and sound.

As part of a project with the Gallery’s local residents, Holden has also created a special window display at the Stanley Picker Gallery, directly taken from his new animated short Chewy Cosmos (Panels to the Walls of Heaven). Showing as part of his current exhibition the full animation – commissioned by Tate Media – received its television premiere broadcast on Friday 1 February 2013 at 12.20am on Channel 4.

Laws of Motion in a Cartoon Landscape